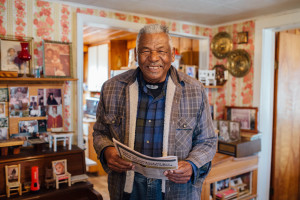 In the wake of the continuing contaminated water crisis in Flint, Mich., six students traveled from John Brown University to provide support and document the stories of the people.

After attending a lecture at the new Open Road exhibit at Crystal Bridges Museum in Bentonville, photographers Ashlyn Bockstanz and Grace Nast were inspired to do a photography project outside of Siloam Springs. They wanted to share a story through their photography that people had not heard, and they thought of the crisis in Flint.

“Learning of what Flint residents have been dealing with for years is absolutely heartbreaking and infuriating,” Grace Nast wrote in an email. “Most of our peers know absolutely nothing about the crisis, and those that do don’t realize the extremity of it as well as the unjust history behind it.”

The Flint water crisis began after the city of nearly 100,000 changed its water supply from Detroit’s system to the local Flint River on April 25, 2014 in efforts to save money, according to the New York Times. Shortly after, citizens began complaining about the water’s taste, color and odor. In August and September of that year, the city issued boil-water advisories after coliform bacteria were detected in the water.

By September, doctors in Flint called on the city to stop using water from the Flint River after they discovered high levels of lead in children’s blood. The EPA has stated that high levels of lead can lead to serious health concerns, including brain damage. In October, Flint reconnected to the Detroit water system, and declared an emergency in December. Residents have been told not to use tap water for drinking, cooking or even showering. 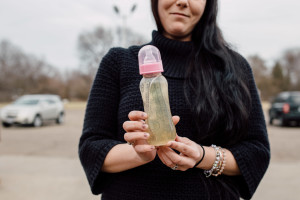 ost recent months, stories of government oversight and inappropriate protocols have come to light, further exacerbating the grief in Flint. Because of the crisis, Bockstanz, Nast and other students felt the need to help the people of Flint and share their stories.

“As artists we were really grateful to have a few other friends join us who are incredibly gifted in writing and videography. Once they joined, the trip became a reality. We all felt the need to go serve and to document the stories of the residents of Flint,” Nast wrote.

Joined by students Salina Adolph, Kelly Escarcega, Hannah Ratzlaff and Ashley Duckworth, the students left for Flint after a prayer send off on March 10. They created a Facebook page called “Flint, Michigan: Prisoners of Hope” to document their trip. In addition to working as documentarians, the students went primarily as servants.

“Our primary goal is to service ourselves to the community of Flint: to serve, to learn and to love,” according to the group’s Facebook page.

“Most of the media has focused on the political and business impact rather than the people affected,” Hannah Ratzlaff, junior history major, said. “We wanted to bring the discussion back to JBU. I think there’s tons of opportunities for students to help.”

“The more and more we talked about it, we realized how emotionally heavy it was, what we were doing,” Ratzlaff said. “It was like a weight put on us, not a burden of calling but if you wish to pursue, you have to be aware of what you’re doing. You’re not there to expose [the people of Flint], to exploit them for beautiful art, you know? You’re there to listen to them.”

Ratzlaff said the group spent most of their time distributing water bottles to the community in partnership with a Flint-based organization called Mission of Hope led by Reverend Bobby Jackson. The organization seeks to “[provide] basic services to Flint’s homeless, poor and mentally ill,” according to its website. Mission of Hope has worked with people from all over the world in response to the water crisis in Flint.

The group of students also worked with United Way and a church in Flint to distribute water bottles. They also visited a local farmer’s market and an open house where government officials and EPA workers set up booths and answered questions from residents. 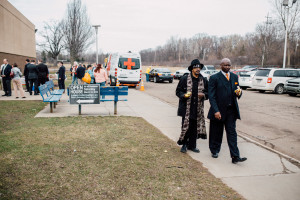 Ratzlaff said that the environment at the open house was very politically charged and different from when they spoke to Flint residents at the farmer’s market. Salina Adolph, senior family and human services major, said that the residents were rightfully upset with the government.

“According to residents, to this day, a formal apology from the local government has not been issued,” Adolph said. “If Flint officials really want to resolve this crisis that they created, they need to build back the trust that they destroyed by issuing a formal apology and honestly admitting their errors, listening to the residents and collaborating with them to create a long-term solution to both the water crisis and issues of poverty in Flint.”

Throughout the crisis, public officials continued to report that the water in Flint was safe despite public outcries. Only after repeated evidence came to light did the city begin to alter its position. Several public officials have resigned in wake of the crisis, including the EPA regional director, Flint’s director of public works and the state’s environmental quality director, according to the New York Times.

Nast agreed with Adolph, explaining that those in power need to acknowledge the suffering the residents are going through, and will continue to deal with as health problems develop over the coming years.

“I think that no matter what, people in power should have the accountability to be honest,” Nast wrote. “The residents of Flint are fighting for their lives and still waiting for the justice deserved.”

As of 2014, 41.6 percent of the people in Flint were below the poverty line and only half of persons aged 16 or above were employed, according to the U.S. Census Bureau.

“I think I can speak for all of us when I say that we felt pretty powerless actually being there,” Nast wrote. “We were thanked over and over again for ‘helping,’ but I was inspired and blessed by the people we met much more than I could have ever hoped to help them.”

“Upon our return from the trip, I felt like I could do anything,” Nast wrote. “Not because we made the journey to Flint, but because we are so privileged and we take that for granted. We even have the basic right of being able to use the water that we pay for.”

“Almost half of the population of Flint lives in poverty due to a broken system that has failed them for generations,” Nast wrote. “They are stuck, hurt and they didn’t ask for any of this, but they are resilient, and this crisis is bringing everyone together. They ask that we don’t forget about them; they’ll still be there when the cameras aren’t.”

The group of students plans to host a discussion panel in Simmons Great Hall on April 13 to further share the stories of the people they met in Flint.