For the past two and a half years, I have been involved in jail ministry as both a member and a leader. Out of all the wonderful experiences I’ve had while at JBU, jail ministry has by far been the highlight. Nothing has proven more fruitful both in 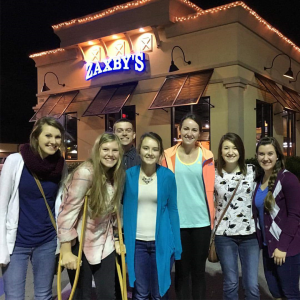 my own walk with God and in learning to share God with others than stepping into the jail on Sunday nights to have church.

It goes without saying, but jail is a dark place. Jail ministry is hugely important not only for bringing light to the darkness, but also to encourage the believers who are striving to live every day as a light in such a place. When we meet on Sunday nights, mostly meet with men and women who have already chosen to follow Christ. We are given the opportunity to build up these believers so that they can take the light and the salvation of Christ to their fellow detainees who are not believers.

A beautiful example of this ministry is seen through a woman who has made notecards filled with Scripture. When we teach a lesson, she will pull out a notecard with the corresponding topic, like anxiety or forgiveness, and write down whatever Scriptures we discuss that deal with that given topic. She told me one week that she does this so that when she sees one of the other women struggling with something like anxiety, for example, she can pull out that card and go through those verses with her. Facilitating this kind of ministry within the jail is one of the greatest joys of jail ministry. Even though we only visit the jail once a week, we know that God is continuing His work through His children who are still in the jail even when we are not.

Men and women in jail are hungry for God, hungrier than I ever anticipated. I have consistently been blown away by the eagerness with which they welcome us into their living space to study the Bible, pray, and enjoy fellowship together. It’s also not uncommon to be in the middle of Bible study and have a handle of men or women walk in with wet hair, having just been baptized. Every time, at least in the women’s cell blocks where I have led church, the room erupts with applause and the new believers are met with a line of hugs. Then they promptly run to their bunks, grab their Bibles and come join us for church.

Several years ago, I never would have believed that I would experience God the most through Sunday nights in Washington County Jail. I also never would have believed that I would experience the purest, most beautiful example of church by sitting around tables with a bunch of women in a cell block sharing our love for Jesus. Jail ministry has shown me that God works where we least expect Him because He is willing to go anywhere, even behind bars, to offer grace and love to His children.

King is a senior majoring in history. She can be reached at KingKN@jbu.edu.