Two rows of smiling Christian students from universities, Bible colleges and ministries across the nation formed a high-five tunnel in the middle of a pathway at the University of California in Los Angeles last Thursday.

Among those cheering on and high-fiving those who came through the tunnel were six students from John Brown University: Christian Faust, David Ruales, Alejandro Ruales, Jose Ricardo Salinas, Christian Smith and Jon Wakefield.

The personal mission trip to Los Angeles involved street evangelism on college campuses including UCLA and culminated with attending The Call Azusa, a 15-hour prayer meeting on April 9 in the Los Angeles Memorial Coliseum.

The Call Azusa, also known as Azusa Now, coincided with the 110th anniversary of the Azusa Street Revival of 1906, which took place in Los Angeles and birthed the American Pentecostal movement. Over 100,000 people registered to attend Azusa Now to pray for unity and revival in the American church.

During the two days leading up to Azusa Now, University students participated in Flood LA, a movement to have Azusa Now participants come before the event and evangelize people on the streets of LA. University students partnered with Luke 18 Project. Thai Lam, national director of Luke 18, said that the vision of Luke 18 is “to raise up a culture of prayer that overflows into a lifestyle of missions on college campuses.” Also under the Luke 18 umbrella for Flood LA were students from bible schools, universities and ministries including the International House of Prayer University in Kansas City, Malone University, and Atlanta House of Prayer.

As people took Bruin Walk, the central campus walkway, on their way to class at UCLA, a total of about 80 people from Luke 18 and Bethel School of Supernatural Ministry partnered to invite people to a paparazzi-like treatment of cheering, a high-five tunnel, and shouts of, “You are awesome! God loves you!” 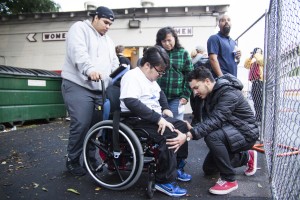 One student in the tunnel beat a djembe as the rest danced and sang worship songs. Others held signs that said, “free hugs” and “free healing,” handed out handwritten encouraging notes and prayed with people.

“We’re attracting people that normally we wouldn’t be able to minster to, an d as they’re approaching the tunnel we’ve been able to share the Gospel,” said University graduate student David Ruales. “This guy came and approached us and was confused. He came completely skeptical and left with a little bit of hope.”

“We are partnered in Christ,” Darlene Fussle from Bethel School of Supernatural Ministry said. “The big point of all of this is to bring hope and encouragement, joy and to just remind people that we get to be childlike, no matter what age we are.”

Sophomore, Christian Faust, said going on the trip was worth the sacrifice of skipping a class in which he is trying to improve his grade. His motivation to go on the trip came from a desire to take more risk in his faith.

“A lot of times we talk about going out and doing ministry in different places and it’s kind of like the apex of what it means to be a Christian. The greatest mission fi eld for every Christian is at our home, and we often become a really dull instrument at our home,” Faust said. “You stop believing in the closeness of God.”

“The reason why I chose to take a risk for this event is because, of all things, this event was a promotion of unity and to understand what God wants for this country,” Faust said.

The University students continued to take risks on the flight home. “We were praying for God to give us words,” senior Alejandro Ruales said. He explained that when God gives ‘a word,’ it means he gives understanding of something in the past, present or future for the sake of encouraging others. “The Lord was like, ‘Stop thinking about it and get up,’” Alejandro Ruales said.

Alejandro Ruales went to the front of the plane and began speaking to those seated near the front. “When I got there, I felt like I had to talk about forgiveness and my testimony,” Ruales said. “I believe the people forgave who they needed to forgive. They repeated after me.”

Faust stood in the aisle several rows behind the front while Ruales spoke and said that he was praying that pride would not hinder people from responding to God.

Ruales said he didn’t want the revival to end in LA: “I want a passion of God turned on like a fire in the hearts of JBU students.”

Freshman Jon Wakefield said that while in LA God healed his right ear of partial deafness through the power of prayer. “My biggest takeaway was learning how to be bold in my faith. Who I am in Christ is something I should never be afraid of.”