The Cathedral filled with visitors, reporters and extra security in addition to the usual students, faculty and staff to welcome Arkansas Gov. Asa Hutchinson on April 7. 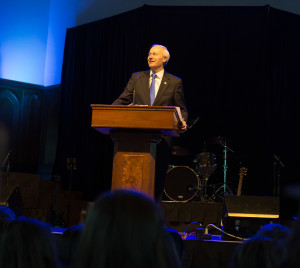 The governor’s address was the first in the new Barnett Civic Leadership Speaker Series, which focuses on Christian civic engagement and leadership. The University plans to host one speaker each year.

Gov. Hutchinson told stories from his childhood growing up on a farm in nearby Gravette, Ark. and encouraged students to be involved in the public sphere. He urged students to pursue justice, persevere despite setbacks and stay focused on following God’s plan.

“Focus on faith, family and service,” Hutchinson said. “The pursuit of justice should be a guiding light.” The governor also discussed the importance of civility in politics, especially in regard to the ongoing presidential race. “Let’s not be reflexive partisans,” he said, emphasizing the importance of listening to opinions we disagree with or do not support.

The governor took the time during chapel to address several rows of students wearing white shirts who supported the resettlement of Syrian refugees in Arkansas. Led by the student- organized group Open Arms JBU—whose goal is “calling for Governor Hutchinson to revoke his stance against Syrian refugees’ resettlement into Arkansas and to welcome all refugees into Arkansas with love”—more than 100 students wore white shirts in chapel. The group also collected 523 signatures in a petition and presented it to the governor after chapel.

“Our passions were ignited through Jenny Yang’s address in chapel and her lunch talk-back session in January,” Gloria Jang, one of the Open Arms leaders, said, referring to a chapel speaker who visited earlier this semester from the humanitarian aid organization World Relief.

“We felt encouraged to take an active stance in supporting the entrance of all refugees in the United States, and decided that it would be an excellent opportunity for us to relay our interests to the Governor when he came to JBU.”

The governor addressed a Tweet he made in November saying he would “oppose Syrian refugees being relocated to Arkansas.” He explained that, after working in the Department of Homeland Security, he did not believe the refugee vetting process was thorough enough and believes Syrian refugees should go through more rigorous screening before their resettlement in Arkansas. He also expressed that European countries should be taking the Syrian refugees since they are closer geographically.

The chapel service sparked a range of responses from students and faculty alike. Benetton Lee, senior accounting major, did not attend chapel due to a tennis match but said he disagrees with the governor and signed the petition in support of refugees. However, he did not support the silent protest by Open Arms JBU.

“I am in support of refugees resettling in the States, with proper validation and a vetting process of course,” Lee said. “Given the choice, refugees would rather stay in their home countries but for obvious reasons they can’t. I think we need to stop viewing them as ‘Syrian (or other nationality) refugees but as human beings in need of help.”

“Open Arms has good intentions…but, there is always a time and place for everything and wearing those shirts in chapel in protest, I think, [was] disrespectful,” Lee said.

Jeremiah Moore, vice-president of the College Republicans Club, said it was gracious of the governor to speak at the University but he had some concerns about the protest. “I greatly encourage political activism,” Moore said. “However, I also believe that activism should be approached with sensitivity. I think the Open
Arms silent protest was very respectful, but I do not think the Governor’s role in the refugee crises merited such an action.”

“With that being said, he has a duty to serve his electorate, an electorate that was overwhelmingly against bringing refugees to Arkansas—this entertains a different ideological question entirely as to his duties as an
elected official. The governor is also the former undersecretary for the Department of Homeland Security. If he says that our vetting process is not sufficient by today’s standards, then who am I to disagree?” Moore said.

“Ultimately I wish the best for these suffering individuals. If our elected officials are to help refugees on American soil, it is their responsibility to make it safe for their own citizens. If they cannot do that, they cannot fulfill their role as public servants of the United States. If they can, then I hope they welcome refugees without hesitation,” Moore said.

Jang said that Open Arms will continue to have a conversation with the governor and state representatives concerning refugees. “In addition to that, we plan to connect with local churches, religious groups and organizations to further solidify support for refugees who are currently in Arkansas and for those who will come,” she said.