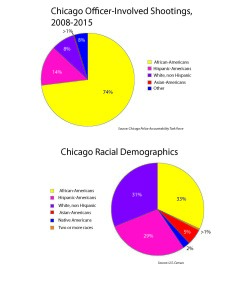 Last week, a student issued an opinion piece titled “Respect the police.” In it, the student called on Christians to respect the police in the midst of instances of police violence. I agree with the statements made about police officers not receiving much thanks for their dedication and service to others. Police officers undoubtedly have an extremely difficult job and I find it unfortunate when every police officer is characterized as being corrupt or cruel, as that is certainly not the case.

However, the piece went on to say that violence perpetrated by a police officer “is his personal problem and not a problem that represents the law enforcement as a whole.” While this student sees the mistreatment and killing of African-American lives at the hands of police officers as an exception to the rule, I see a pattern. And I am not the only one.

This past Wednesday, a report was released by the Chicago Police Accountability Task Force, which was commissioned by Mayor Rahm Emanuel. The Task Force revealed “data [that] gives validity to the widely held belief the police have no regard for the sanctity of life when it comes to people of color.” They described how African-Americans were “stopped without justification, verbally and physically abused and in some instances arrested, and then detained without counsel” over and over again. The report details that of the 404 shootings that occurred in Chicago between 2008-2015, 74 percent were African-Americans hit or killed by police officers (African-Americans make up only 33 percent on Chicago’s population).

These findings are, of course, no surprise to African-American residents in Chicago who have been speaking out against unfair treatment by the police for years, only to be ignored or dismissed. “The community’s lack of trust in C.P.D is justified,” the report continued, in light of the “disproportionately negative experiences with the police” African-Americans have endured over a lengthy period of time. This pattern of systemic injustice is not only limited to Chicago, as police task forces in Cleveland and Ferguson have revealed similar findings.

Police violence is not a trend that will fade into the background if we simply ignore it for long enough. The problem goes much deeper than a few bad cases. We cannot shy away from identifying the systemic issues that plague our country’s law enforcement and criminal justice system, and we must recognize the destructive effects that these issues have had not only for African Americans and people of color, but for our community as a whole.

Goddu is a senior family and human service major. She can be reached at GodduA@jbu.edu.