The price of EpiPen has recently been raised for the fth time since 2009 by the product’s parent company,the Mylan N.V. EpiPen is a type of epinephrine injector, a lifesaving drug for allergies that cause anaphylaxis, a potentially deadly reaction involving hives and potentially the swelling of the throat.

For example, if a person who is allergic to bees is stung and has a life-threatening reaction the person can save themselves with the EpiPen. According to USA Today, the price has been raised from $57 in 2007 to $615.58 as of August 2016, marking a nearly 500% increase in cost for the consumer.

“The sad thing is they’re going to pass the cost onto the customer, or the patient,” Rhonda Hostler, director of JBU’s health services, said.
The EpiPen has a shelf life of only one year, meaning that families and schools have to buy more annually after they old ones expire. While many hospitals administer epinephrine through manual injections, places that don’t have staff trained to use
a manual needle need the EpiPen’s injector. This could be a huge financial burden.
“EpiPen has an extremely short shelf life,” said Dr. David Chorley, a physician from Bigsby, Oklahoma who prescribes the EpiPen, “Schools often won’t use more than one per year, so they have to keep buying them.”

While there are schools that receive the drug for free, those with a high deductible insurance or no insurance at all will still be shouldering the high cost. “It could be debilitating for families that have limited access to medical treatment,” Dr. Chorley said, “You could end up with a kid,-an allergic to everything kid,-who has to go to school without an epipen.”
This price increase comes as another instance in the continuing trend of pharmaceutical companies increasing prices far above what is affordable for the average citizen.

“Absolutely it is [a part of a trend],” states Hostler, “why can you go down to Mexico, to Canada, to get prescriptions for relatively inexpensive, but here in the States they’re two or three times the cost?” According to USA Today, pharmaceutical companies have been gouging prices of lifesaving medication since at least 2001, with Novartis’ cancer treatment drug Gleevec. 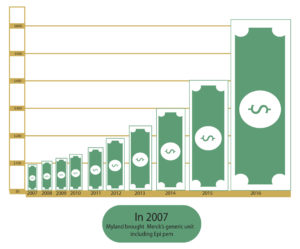 “It’s like the textbook costs at universities,” says Chorley. “You have to buy the book from the publisher, so they can charge whatever they want. That’s not as bad of an issue, but it’s similar.”

Mylan has since stated that they will be manufacturing a generic alternative to the EpiPen at 50% of the cost, but at $615 for the main product, that may not be enough to make it affordable for many who need it. According to USA Today, other companies who could release a viable alternative to the EpiPen are unable to do so due to the patent enforced by Mylan, delaying a true generic product for some time. “The problem with all medicine,” said Chorley, “is that the consumer, that’s you and me, have no idea of the true cost of medication. We have no way of choosing the best health care value.”