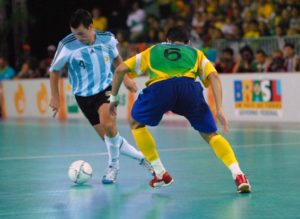 Professional futsal players from Argentiana and Brazil compete in the 2007 Pan American Games in Rio.

Students can expect to see the construction of a new sports facility at John Brown University starting in December.

The University has recently accepted a grant from the Walmart Foundation to build a futsal court near the intramural fields. Construction is slated to completed by February 2017.

Futsal is a modified form of soccer with ve players on each team. It is played on an indoor court with a smaller, denser ball than a standard soccer ball and is played professionally around the world. Countries with top futsal players include Brazil, Portugal, Spain and Russia.

The Wal-Mart Foundation gave the $76,677 grant to the University for the purpose of building the court as both a community and a campus project.

“It was a really great kind of convergence of different groups,” said Professor of Psychology Kevin Simpson, one of the professors involved with the grant.

The City of Siloam Springs will provide labor and equipment for the construction of three hard- surface courts that are fenced and lighted. The Siloam Springs Futbol Club will oversee facility operations once it is constructed.

Scott Marksberry, head coach of men’s soccer, said, “Futsal is, globally, a great way for people to spend time together. You see futsal courts as kind of a centerpiece to a lot of communities. It’s a place for people to gather and play. It’s a very casual version of the game.”

While the court is being built on campus, Marksberry said he hopes that the larger community of Siloam Springs will use it;
“I think for us it’s really a great way for the Siloam Springs community to come together.”

“I think that the community will use it more than intramurals will use it,” Marksberry added. “It’ll really wind up being a facility [for] community use.”

“It’ll be cool just that we have our own designated space,” Hoffine said. “Futsal’s a good way to stay fit, you know,
work out. It’s really fun, you know, like small-sided games. Anyone can be good at futsal.”

Marksberry said that he thinks that intramural futsal will be organized a year after the court’s completion.