Digital redlining is the “connectivity divide” between some communities in the United States, according to AFRO, an African-American publication.

The practice affects many rural, poor and non-Caucasian communities, according to AFRO, putting 20 percent of Americans behind 20 years technologically.

Trisha Posey, professor of history said, “Redlining was a practice that developed out of Federal Housing Administration policy in the late 1930s and continued into the late 1960s. In establishing mortgage lending requirements, the FHA, in its policy statements, identified mixed-race or African-American neighborhoods as credit risks, refusing to support lending for mortgages in these communities.”

Posey said, “The practice was known as ‘red-lining’ because red lines were literally drawn around these neighborhoods on FHA lending maps to indicate that they were too high of a risk for investment.”

Posey explained that the Fair Housing Act of 1968 “prohibited discrimination in lending based on race, color, religion and national origin.” 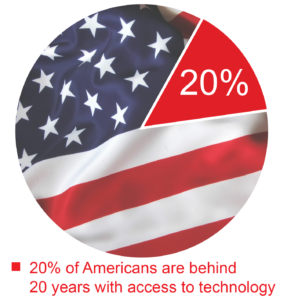 But this did not completely solve the problem. “The practice still continued at the local level. In the 1970s local groups began pursuing changes in legislation at the local and state levels to have discriminatory lending practices outlawed. The Home Mortgage Disclosure Act of 1975 made effective changes to loan practices that addressed some of these problems,”  Posey said.

Even with the above laws the problem has not been fixed. Posey said, “While the FHA redlining policies have been eliminated, studies have shown continued discrimination against minority families in the area of mortgage lending. An investigation of lending practices in Memphis[Tenn.] revealed that African-American applicants with similar credit scores to whites were denied loans twice as often as whites. A 2005-2006 study revealed that differences in treatment of African-American homebuyers disadvantaged them 45 percent of the time.”

The above practices have led to several repercussions. Posey said, “The wealth via home ownership that was accumulated by non-Hispanic whites in the post-World War II era (in large part because of the housing provisions of the GI Bill) was wealth that African Americans did not have access to because of  discriminatory lending practices.”

Posey also said, “The geographic segregation that occurred because of redlining still influences the geography of race in the U.S. Americans are more racially segregated geographically than they’ve ever been, in part because of the history of redlining. This, of course, has impacts on access to equal educational opportunities, voting rights and employment.”

Becky Ramirez, president of MOSAIC, said that she did not have prior knowledge of digital redlining, but was not surprised by it. When asked how the problem of redlining could be fixed she said she was unsure if it could be completely fixed and it would take a radical change in who is in power.