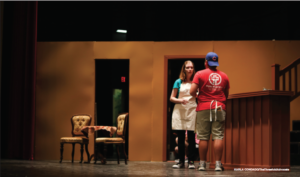 George Horvath faces her, his arms crossed, his eyes narrowed. “How could anyone love you?” he disgustedly spits out. Amalia Balash returns the glare, her hands on her hips, nostrils slightly flaring. The hate is stagnant in the air.

How could they know the love letters in their pockets were in fact from each other?

This fall, the John Brown University Department of Music and Theatre presents “Parfumerie,” a witty and heartening piece written by Hungarian-American playwright Miklos Laszlo and adapted by writer and composer E.P. Dowdall.

“Parfumerie” is a charming tale following the steps of a George Horvath, a Hungarian perfumery employee. Through an unfortunate series of events, Horvath finds himself jobless after his employer suspects him of being the lover of his cheating wife.

Only to make matters worse, he discovers the love of his life, a woman known only through letters, is Amalia Balash, a co-worker with whom he frequently quarrels.

This play from the 1930s has inspired several Hollywood films and a musical. Titles such as “The Shop Around the Corner,” “In the Good Old Summertime,” “She Loves Me,” and “You’ve Got Mail,” loosely follow the quirky storyline of two quarreling coworkers who fall in love.

Jan Lauderdale, the director of the production, describes “Parfumerie” as “delightful.”

“It has something for everybody,” Lauderdale said. “The characters are outstanding.”

Lauderdale expounds on the characters as driving force of the play.

“My favorite part of theatre is building characters and creating unique characters,” Lauderdale said, “so this offered an opportunity for each actor to create a unique character with a lot of depth. So, that’s what we are focusing on.”

Casting the play proved difficult for Lauderdale as there were many talented student auditions. However after careful selection, Lauderdale made the cast official.

“They have applied themselves diligently,” Lauderdale said proudly. “They are taking it upon themselves to really push themselves in that regard.”

“Parfumarie” is full of fresh talent from the incoming class of 2016.

Fletcher Lowe, a freshman business administration major, who portrays the play’s charming male lead role, has enjoyed the freedom to develop and craft his character.

“More so than any character that I have taken on, this is a character very similar to me.” Lowe said excitedly, “So it’s fun to get inside his head and put part of myself in it, but also inflect who George Horvath is on the stage,” Lowe added.

Lowe’s enthusiasm, wild gesticulations and expansive variety of facial expressions on the stage during rehearsal are evidence of his talent and love for the character

“My personal interpretation of her is she really just wants people to like her,” Gage said thoughtfully. “It’s so difficult for her when Horvath doesn’t like her.”

Gage’s performance as the sweet but strong Amalia, shone brightly as she tussled in verbal matches with Lowe.

Lauderdale is excited to see the outcome of the play, believing it holds, not only entertainment, but wisdom as well.