Chuck Hyde, Chief Executive Officer of John Brown University’s Soderquist Leadership, is running unopposed for his second five-year term on the Siloam Springs School Board. He is just completing his fifth year and said he is looking forward to another five.

Steve Beers, Vice President of Student Development at the University, has just completed his first year on the Siloam Springs Board of Directors.

What motivates these two busy men to set aside several hours a week for local government?

Beers said that this is his 19th year as a resident of Siloam Springs and he plans to stay.

“My experiences at JBU have trained me to think broadly,” Beers said, explaining that he frequently works on teams and make decisions that are good for the University as a whole, not just his department. “I thought, you know what, I might be able to provide something to serve.”

Beers also said he was motivated to run for his position because he is prepared to serve, and because he wanted to be a part of the larger community. He saidhe wanted to be a Christian in the public arena. Beers also said that the most meaningful part of his work is getting to be a part of larger conversations about how to make the city a good place to live. “That impacts everybody,” Beers said, adding that even decisions about what sidewalks to build and improve can have an impact on everyone in the city.

Beers said one of the unexpected things about his job is that he is now a public figure. Anything he says or does in a board meeting can end up in a local newspaper. 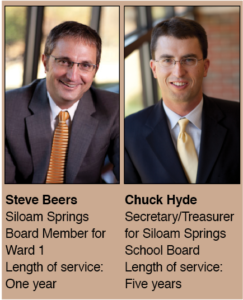 “After I got sworn in, I asked the city administrator, ‘So I’m a politician?’” Beers recalled. “And he said, ‘Yeah.’”

Hyde said he is motivated to work on the school board because the public education system is important to him. His wife is a teacher, sister an administrator, mom was a school nurse, and father was on the school board. His third- and a fifth-grade sons also attend school locally.

“It felt like a good fit, something I was very interested in, and just a way to give back to the community,” Hyde said. “To help [students] thrive and grow and reach their potential, that’s a big deal to me.”

“For kids that want to graduate high school, learn a trade, and enter the workforce, it’s unbelievable training for them.” Hyde said company leaders in the area contributed to the curriculum, and he called CASS a “remarkable case study,” that highlights the work of the community. Hyde said  his work with Soderquist Leadership has trained him to prepare people for future roles, which helps him to prepare students for life after high school.