A recent study by the Pew Research Center states that social media is being used as a platform for discussion on race and racial inequality.

Social media has been credited by some with “propelling racially focused issues to greater national attention,” according to the Pew Research Center.

Becky Ramirez, president of MOSAIC, said, “I absolutely think that social media has played a part in increasing the amount of conversations about race between people who haven’t had to think about race throughout their lives-or who generally don’t want to.”

However, Ramirez said she sees the change on specific platforms. She said that Facebook and Twitter “have become places where people gain awareness about issues – but mostly through the lens of their own opinion being validated by their friends.”

Sophomore Alicia Watt said, social media “has definitely made many aspects of race more obvious and public as compared to how it was maybe 20-30 years ago.”

She said, “We can now discuss race with anyone – politicians, celebrities, friends across the world, etc.”

She said, “I feel that people can put their words out there more which is making it seem more outspoken for many – especially people of color

Watt said there are several benefits to social media being used in these conversations.

“Those who have access to social media are able to use it as a way of amplifying their voice, it’s easier to hear united and collective opinions/views on certain issues and the media can use it to share more information with an incredibly large amount of people.”

Ramirez agreed with this and said, “Some of the benefits are that a wide range of people can almost immediately be made aware of important issues, and different viewpoints can be heard. There are so many people who are becoming passionate about different social justice issues because of things they saw on facebook that inspired them to learn more. I think that’s huge.” 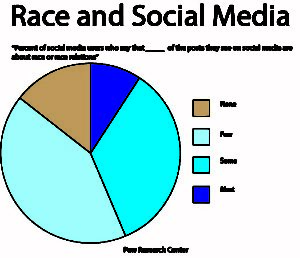 However, Watt also listed several drawbacks to the use of social media in these discussions. First she said, “Some of the emotion gets lost because it’s not a face-to-face conversation/interaction.”

Another potential drawback is that “Social media can skew some words and views,” and it’s sometimes “very biased towards those with systems and institutions on their side.”

The last drawback Watt said was “With conversations happening mostly on social media, it can be hard for tangible actions to take place.”

Ramirez had expressed a similiar sentement and said, “Social media tends to provide methods for ‘making your opinion known’ that require the absolute minimal amount of commitment/communication with others so that users often feel as though they have done their part if they just ‘like’ a post they agree with.”

She said, “This is a dangerous form of complacency that deters people from engaging in important, necessary, difficult conversations in real life.”