The time has come again for of spotting unconventional haircuts and finding out who is new to the men’s rugby team.

Every year, the rugby team has a tradition for the incoming freshmen. They can get their heads shaved in a comical way as a voluntary initiation rite, and as a way to bond with their teammates.

“It’s just a way to have people become a part of the rugby team. It’s a part of joining a brotherhood, and a way to connect with people. Having this experience that other people had is just something that brings people together,” David Zamora, captain of the rugby team, said.

Players said the tradition has created some fond memories.

“I actually had an interview two days after it happened. I wore a suit jacket; I got all dressed up for this interview, and I slicked down the fragments of hair I had left,” Andrew Hultstrom, a sophomore rugby player, said. “Conveniently, one of the guys who was interviewing me was a former rugby player, and he knew the tradition, so he found it quite interesting.”

Players said the tradition is a positive way to bring the rugby team together as a community.

“You bet your bippy it’s good for the team,” freshman Josh Barrett said.

The freshmen aren’t the only ones who get their yearly haircuts. Since last year, the team captains and often some of the older members of the rugby team volunteer as well, as a way to bond with the freshmen and keep it from becoming something negative.

“It doesn’t only happen to new members of the rugby team. We gave our captain a monkey tail beard, that goes from his sideburn, down his chin, and up around his chin, so that it looks like a monkey tail was on his face,” Hultstrom said, recalling last year’s shaving.

“I think it’s a lot of fun, and it’s a good bonding experience,” Davis Fulmer, a freshman sporting his new haircut, said.

Although the tradition is optional, the majority of rugby players participate.

“I wasn’t able to do it, because I’m in the play, so I’m not allowed to cut my hair. I mean there’s a few guys who just don’t want their hair cut, but I think everybody who could did it this year,” Barrett said.

“People around me knew that I was a part of the rugby team, which was awesome, because I was identified as a rugby player then. It just made me more outgoing and social, even though I had a crazy haircut,” Zamora said. “I think it was a very communal thing, and it just created that brotherhood.” 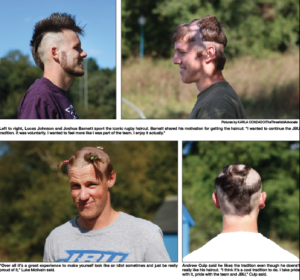