If you haven’t made plans to vote, you still got time. Early voting in Arkansas began October 24 and will go on until the November 7, with the official election day on the November 8.  There are various places to vote only a few miles from campus. Three of the closest are the boys and girls club, the country clerk’s office, and the fire department (addresses and times listed below for early voting). On Election Day (November 8th) the polls will be open from 7:30 a.m.–7:30 p.m. If you’re in line at your voting location by 7:30 p.m, you will still be allowed to vote.

In contemplation of the various states that the students of the university represent,  Doug Reuter, former member of the Minnesota House of Representatives from 1997 to 2001, emphasized importance of being knowledgeable about the registering regulations of both Arkansas and a student’s home state, since they may vary and the first step to voting is registering correctly by either registering in the state where the student is currently in or sending an absentee ballot back to the student’s home state.

“If the people don’t exercise their right to vote, they end up with the government they deserve rather than the one they want,” Reuter said as he emphasized the importance of college students to take part in voting

In light of this, before showing up to one of the voting locations, it is important to make sure you are registered to vote in the state of Arkansas and have received your voter registration card, this should have been done before the deadline on October 11th. If you have not done this, then you will, unfortunately, not be allowed to vote.

If you have registered to vote, then the rest of the process is simple, first choose a convenient location. Take your voter registration card and a photo ID with you to the voting location (A photo ID is required if it is the first time you are eligible to vote or if a copy of your ID was not submitted when registering to vote). Acceptable forms of indentification include a Driver’s license, a non-driver’s license ID (such as passport), a current utility bill, bank statement, government check, paycheck or any government documents with your name and address.

The idea that voting is complicated is a common misconception. Haley Gehrke, a senior education studies major, had a contrary experience when she voted. Voting was simple and the issues were explained very well, according to Gehrke. The various issues facing Arkansas were presented and explained in descriptive paragraphs before she received the actual ballot. Gehrke described the experience as “quick and informational”.

Abbigale Whitfield is a sophomore graphic design major who decided to vote early. Both Whitfield and Gehrke had similar experiences. “I walked in and waited in line until someone was available to help me, I gave them my registration card and my photo ID. Then the lady looked for my name and crossed it off the list. She took me over to the voting booths, inserted my information into the computer and the presidential ballot came up. She left booth and the rest was very quick and simple,” Whitfield said. 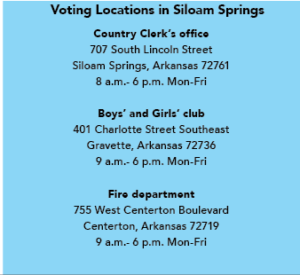