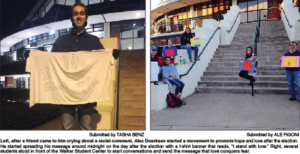 A figure perched on the white wall of the Walker Student Center steps. He shivered a bit in the early morning air. A white tee-shirt with the words “I stand with Love” scrawled across hung in his hands.

Along with thousands of other Americans in the United States, Alec Doerksen, freshman biochemistry major, found himself disappointed with the presidential election outcome. On November 9, the biochemistry major spent the day frustrated and angry, not only with Donald Trump’s presidency, but also with the response of the American people.

One of Doerksen’s friends, approached crying as she had fallen victim to racist jokes. This saddened Doerksen and he decided to take action.

Doerksen rummaged in his closet, found an old tee-shirt, cut it in half, marked it up with color pens and ventured out of J.Alvin and centrally situated himself on the Walker steps.

He wanted to send a message to the community at John Brown University: a Christ-like love conquers all fear.

Around midnight, Tasha Benz, a junior psychology major, left Walker after a prayer meeting when she saw and inquired about Doerksen’s protest. After sharing with Benz, she eagerly joined Doerksen.

Together they stood outside from midnight to 3 a.m. as Doerksen challenged himself to stay out until he saw no more people.

Students from New Generation, a prayer and discipleship group, left Walker and found him holding the shirt. The group prayed over him and wished him the best with his endeavors. One girl brought him hot chocolate and a cheeseburger from McDonalds.

Doerksen said their gestures of kindness rejuvenated and bolstered his determination to continue his silent protest.

“It was awesome to feel that presence of love and hope expand,” said Doerksen about their prayers.

On November 10, Doerksen rose early and took his place again near the Walker steps. He said throughout the day, students caught sight of the shirt and either stopped and conversed or looked confused and continued on their way.

In the afternoon, several of Doerksen’s friends and others attracted to his cause created signs of their own and joined him.

During the midmorning, one student passed and made negative comments towards Doerksen. Later that afternoon, the same student passed and noticed all of the other students silently protesting with him. The student became angry and hurt, so Doerksen pulled him aside and explained to him the purpose of the protest. Doerksen said the student appeared more settled and understanding after they spoke. Then, Doerksen and his friends prayed for him.

“It was probably my favorite experience of the day,” Doerksen said with a slight smile.

Benz prayed for many of the students passing by Walker, the ones that stopped and talked and the ones that went on their way. Both Doerksen and Benz explained their protest and simply talked to students.

Benz believes Christ-like love is essential to share with everyone in the JBU community.

“This is so important because God calls us to love people. We are called to share his word, and without love nobody will open their heart to accept the loving savior Jesus Christ,” Benz said. “It is also important because we are to be Christ like. If we do not stand in truth and love, we cannot draw others in.