The last time the women’s basketball team went to nationals was the 2013-14 season. That year, they made it to the final four, beating the number one ranked team in the nation. The Golden Eagles had the championship in sight, but ended up losing by two points in the final four.

Now, years later, a new set of players for the Golden Eagles team has their sight set on the NAIA Championship.

“Nobody on our team has been to nationals with this program,” Janna Schammel, a junior guard for the team, said. Schammel said that this is a new experience for the young team, but they are prepared to fight for the national championship title.

“I think the biggest difference between this year’s team and last year’s team is we are a deeper bench this year,” Soderquist said. “We play a lot of players that have come in. We don’t really have a drop off when we sub.”

One of the players that joined the team is senior Kodee Powell. Transferring in as a point guard her junior year, Powell is now the only senior on the team and has taken the role of team captain.

“Coach said to take leadership, and I’ve tried to play that role this year,” Powell said. “It doesn’t seem real that I’m about to play my last game.”

In addition to Powell, the team gained two transfers this season: Rosa Orpo and Luize Skrastina. Coming in as blockers and posts, the transfers have stepped up to an untraditional role and worked to initiate plays for the team in their post positions.

The women’s team is going into Nationals as the 5th ranked team in their division.

Soderquist said that one of the strengths of this year’s team is that they are one of the highest scoring teams he has ever had.

In addition to their overall rank, Soderquist said that the women are ranked number one in the nation in multiple categories including the number of three-point baskets made, the amount of threes made per-game and total made three-point percentage.

Although they have a high rank and many strengths, Powell said that they will have to hit the reset button for Nationals.

“We have to give it all we have,” Powell urged. “Both teams will go to war pretty much because if you lose, you’re done.”

Powell said that the best way for JBU students to support the team is by cheering them on, even if you are not able to drive 20 hours to Nationals.

There will be online statistics and the games will be posted online for students to watch and support their Golden Eagles women’s basketball from afar.

The Lady Eagles won their first-round game on March 16 against Benedictine with a 74-71 victory. They lost to William Woods in round two on March 17 by three points. 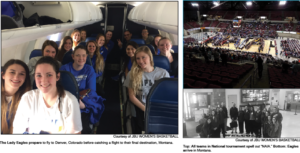