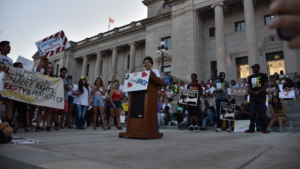 LITTLE ROCK, Ark. Marchers protesting the repeal of DACA were not only calling to reinstate the deferred action set in place by the Obama administration, they were also calling for a bill that would directly address issues of immigration and citizenship. The DREAM Act, introduced in 2017, is a bipartisan bill that would help the citizenship process for undocumented DACA beneficiaries, high school and college graduates, current employees and those who have enlisted in the military.

Mireya Reith is the founding executive director of the Arkansas United Community Coalition. She is a second-generation immigrant born in Fayetteville Arkansas, and she is committed to helping the community.

Reith’s family was one of the first families to arrive in Fayetteville. She moved from the state as soon as she had the opportunity, because she did not feel welcomed in Arkansas. When she came back, Arkansas had become the fourth fastest-growing immigrant population.

“My nickname in grade school was ‘Mexican monkey,’ because, as I came to learn, that is how they identified our people from our countries. They saw us as less than human.” Reith said.

Reith explained that she did not want to go back to Arkansas, but she returned as a volunteer. She helped excite the Latino vote in the state in 2010. This was one of the first times the Latino vote had been considered by the Arkansas’ candidates running for office. Reith gathered many DREAMers and convinced them to support Blanche Lincoln, who had agreed to help the DREAMers. However, in the end, Lincoln did not vote to support DREAM.

“She said, ‘Mireya, I’m sorry. I’m going to lose more white votes than I’m going to gain in Latino votes by supporting the DREAM Act. I can’t do anything for you if I’m not in office,’” Reith explained.

Mireya decided to follow through with her job and support Lincoln, and she was surprised when she saw many DREAMers join her.

“They said to me, ‘Mireya, we are not willing and we are not ready to give up on our future. We have to believe that eventually our politicians will eventually do the right thing. But if we don’t show up, then nothing is going to happen,” Mireya said.

From that day, Mireya has committed to help immigrants and specifically DREAMers in Arkansas. That is when she founded the AUCC.

“I refuse to believe this is Arkansas’ legacy,” Reith said. “Arkansas rejected me, and I will not stand to have Arkansas reject other kids like me and so many others in our state.”

Reith explains that AUCC’s mission is to empower Arkansas’ immigrants in their communities through civic engagement and by helping immigrants become more integrated in Arkansas. They also try to avoid injustice by educating immigrants on their rights. They encourage the community to document any injustices in order to take action against them.

Reith explained that the community of Siloam Spring who could potentially be affected by the removal of DACA can be helped by the AUCC. They are providing free assistance on DACA renewals.

Senator Joyce Elliot, has been fighting since 2003 to pass the Arkansas DREAM act. “I will keep trying until the DREAM comes true,” she said.