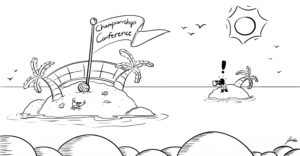 The Southern Athletic Conference saw the biggest upset of this semester on Sept. 15, when John Brown University beat Oklahoma City University for the first time since 2012.

Bayli Reagan, junior outside hitter, said she believes the win should be contributed to the mindset of the team.

“The chemistry on the team is insanely good,” Reagan said. She went on to say that in past years the team occasionally needed to have team meetings to work out any “tiffs” between players. This year, however, the team is unified both on and off the court. “Everyone gets along and there’s no drama,” she said.

Beth Brankle, senior libero, agreed. “This group of girls is the best and most fun I’ve ever played with,” said Brankle. This year the team also adopted a mentality of getting “one percent better” every day.

“The team’s been working really, really hard,” head coach Ken Carver said. He said his goal for the team this season is to continue to hone fundamentals and execute a quicker tempo offense.

“JBU has always been kind of one of those programs that has been good on the volleyball side of things,” Carver said.

Carver said he hopes that instituting a new offense will help them make the jump to a “great team.” In the past, the team used a more structured offense with strict rules. This year, Carver hopes to build off that base and allow more creativity for the setters and other players to be more active in the offense. Carver said the new offense position takes a high knowledge of the game and the creativity to know when and where a good opportunity to hit may be.

“This year there is a whole different type of focus and poise and mental discipline that I think was honed last year in season. We talked more about how to improve our team, and worked during our off-season last spring keeping our focus on being better during our season now,” Carver said.

Carver said the two new additions to the team, sophomore outside and middle hitter Kinzee Mayo and freshman outside hitter Taylor Glover, have adjusted nicely to this new style of play.

“All of our kids are really bright and they do really well with that challenge,” Carver said. He said Mayo brings lots of versatility to the team because she plays multiple positions on the court and said Glover is a natural athlete that will bring a lot to the team.

“Everyone’s giving their best and everyone wants to play for the team not just for their own glory,” Reagan said.

Reagan said the girls are trying not to focus on winning and losing, but rather on giving their best effort and honoring God with the gifts he’s given them.

“We’ve got nothing to lose this year,” she said.