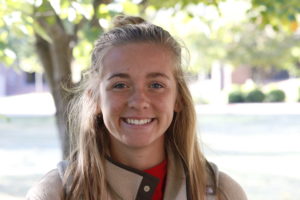 Emily  Jordan may be short in stature, but that doesn’t stop her from being a dangerous midfielder for the Golden Eagles soccer team. Jordan, a freshman from Republic, Missouri, says that when she isn’t playing soccer for John Brown University, she enjoys hanging out with friends and being outside.

“I choose JBU because of the atmosphere on the soccer team and the overwhelming love for Jesus Christ,” Jordan said. “Our season is going really well. I am liking it a lot!”

“She’s a great team player and is crafty on the ball with good vision,” Paulsen said.

“My favorite thing about Emily in soccer is her drive to succeed,” Poor said. “She’s her own worst critic and won’t settle for anything less than her absolute best. If she could have done better in a game or practice she’s the first to know and she’ll work hard to fix it. My favorite thing about her in life is her love of people. She’s a great listener and great listeners are nearly impossible to come by.”

When Jordan isn’t playing soccer, she said she enjoys hanging out with friends and being outside.

The women’s soccer team is currently 10-2, undefeated in conference play and currently ranked 21 nationally. If they win out in both conference and the conference tournament, the team will go to Nationals.