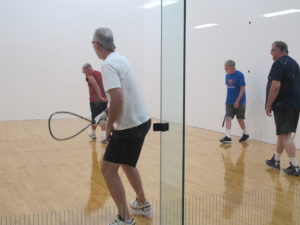 While intramural season began for students at John Brown University in the fall, a lesser-known form of community recreation has been in effect much longer.

John Brown University faculty members have participated in intramural sports as well as an organized pickup game for over 20 years. Basketball and racquetball are two of the most popular faculty-organized sports, but professors have also organized intramural soccer and flag football teams as well as mountain biking and road biking groups.

Kevin Simpson, a psychology professor at JBU, played on an intramural soccer team last spring at the request of a student. The team was comprised of JBU faculty, and played against other student teams.

“We’re a pretty good team,” Simpson said. “It’s just funny because you still have those competitive tendencies but you kind of have to dial it back a bit so you don’t say or do something stupid.” Simpson, a graduate of JBU as well as a former JBU soccer player, said he loves the opportunity intramurals give him to continue playing soccer and building a sense of campus community.

“I love it because you often mix in with the students so you’re teammates but also competitors,” Simpson said. “I just think it adds [to your relationship] because they get to see a different side of you.”

Ed Ericson, Vice President of Academic Affairs, regularly plays basketball and racquetball at the Walton Lifetime Health Complex. Wednesdays and Fridays at noon, a group of six to eight faculty and community members play pickup basketball games. Organized by Ryan Ladner, Associate Professor of Marketing, the group used to go by the name of “LBA,” or “Lunchtime Basketball Association.”

“[Ladner] likes playing 3-on-3 or 4-on-3 half-court no check so it’s worse than full court because when you’re full court we get to walk up and down the court, you get a break,” Ericson said. “When it’s no check 3-on-3, you know, right as it goes in someone runs out, they throw it in, you’ve got to go get them, so you’re sprinting back and forth. It’s hard work.” Ericson said many of the people who participate in the faculty pickup games have high school or college basketball experience.

Ericson admitted that while fun, basketball isn’t his best sport. “They jokingly say I play football on the basketball court,” Ericson said. “I didn’t make the varsity [basketball] team in high school, and that’s when I started playing racquetball.” Along with basketball, many community members from Siloam Springs as well as JBU faculty play racquetball in the Health Complex.

Ericson was the Arkansas state champion in racquetball last year, but still finds hard competition at the afternoon matches.

Rod Reed, Chaplain and Dean of Christian Formation, said the lunchtime racquetball matches allow players with a variety of skill levels to come together and have fun.

“You get exercise, you get competition, you try not to get too intense,” Reed said. “It’s a ton of fun and it’s one of the main ways I try to stay healthy.” Reed said these lunchtime matches have been a tradition for over 20 years. Students occasionally come to work on their skills and improve their game.

“Because there are people at different levels of skill you can kind of gauge where you are and if you’re willing to work on it, you can get better,” Reed said. Not only do the afternoon matches allow for competition and exercise, but also a strong sense of community.

“I have three days a week where it is a meeting on my calendar because [not only is it] important for me health-wise but I’m sharper mentally [and] I’m sharper spiritually if I’m doing that than if I’m not. It’s a part of my regular routine of life,” Reed said.