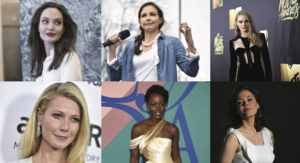 Harvey Weinstein, Oscar-winning movie mogul, sexually preyed on female movie stars, models, producers and journalists since the early 1980s. Due to his power and influence in their lives, these women held their tongues in fear for many years.

However, the silence shattered when nearly 50 women raised their voices against Weinstein, accusing him of sexual harassment, assault, and rape.

Actresses such as Ashley Judd, Gwyneth Paltrow, Cara Delevingne, Angelina Jolie and Rose McGowan spoke openly about their experiences with Weinstein, ranging from disconcerting and vulgar conversations to fearful and violent encounters.

Collectively, the women concluded that silence only fueled Weinstein’s tyrannical power over their lives. They utilized various social media platforms and influential news sources to reveal their stories of his crimes. On Oct. 19, Oscar-winning actress Lupita Nyong’o, star of 12 Years a Slave, released an opinions piece to the New York Times regarding unnerving instances involving Weinstein where he demonstrated audacious and aggressive behavior towards her several times throughout her budding career.

Before she was cast in her first movie, college-aged Nyong’o met with Weinstein for lunch where he attempted to pressure her into drinking alcoholic beverages she didn’t want. Nyong’o stood her ground and politely refused. Later that day, Weinstein invited her to his house to view a film with his family, where he coerced her into his bedroom,  removed his shirt, and insisted on giving her a back massage.

Nyong’o panicked, but offered to give him a massage as to stay in control of the situation When Weinstein attempted to remove his pants, Nyong’o expressed her discomfort and left his home.

At another lunch meeting several years later, Weinstein announced that they would finish their meal in a private hotel room, explaining to Nyong’o that if she wished to be an actress, she must be “willing to do this sort of thing.”

Nyong’o declined again, saying that she wouldn’t be able to sleep at night if she did what he asked. Fearful of the influence he might inflict on her career and safety, Nyong’o remained professional and polite, but left him as soon as possible.

Nyong’o writes that shame and guilt crippled, blinded, and silenced Weinstein’s victims and kept them from speaking the truth publicly. That silence energized Weinstein’s influence in each woman’s life. Nyong’o proposes a solution to turn the tables against Weinstien.

Nyong’o wrote, “Now that we are speaking, let us never shut up about this kind of thing. I speak up to make certain that this is not the kind of misconduct that deserves a second chance. I speak up to contribute to the end of the conspiracy of silence.”

We the Threefold Advocate stand by Nyong’o’s declaration against the slavery of guilt, shame and silence, and, moreover, those who have acted to place them in those chains.

We the Threefold strongly condemn the predatorial actions taken by Harvey Weinstein, who abused his powerful and influential role for selfish gain. We stand and support men who protect and serve women and do not exploit them for pleasure and power. As a Christian school, we should desire to reflect the model Christ gifted us: to love and cherish one another.

We applaud the courageous women who, weary of silently suffering, fought for justice for themselves and women everywhere.  Nyong’o, near the end of her article, addressed her Hollywood sisters, saying, “Though we may have endured powerlessness at the hands of Harvey Weinstein, by speaking up, speaking out and speaking together, we regain that power,”

We the Threefold stand for truth. Crimes of sexual nature are often kept silent and hidden and because of this, the crime is far too common. Women, or men, who mutely suffer…speak out against those who have hurt you. They should hold no power in your life. Find someone you trust and share your story. Don’t suffer silently and alone.