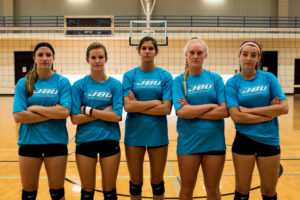 The John Brown University volleyball team has had a great start to their season, winning their first ve matches. Their success has been influenced in part by the arrival of five new freshman player.

Carly McKinney, Jessica Meyer, Elizabeth Williams, Lindsey Davis, and Megan Beck are the new additions to the Golden Eagles this year, and they are already making an influence on the team.

Coach Ken Carver said his new players “bring a lot of energy to the team as well as a lot of spiritual depth and character.”

The Sooner Athletic Conference named McKinney, an Elementary Education major and a 6’0 outside hitter from Mission Viejo, California, Attacker of the Week after her first few collegiate matches. In high school, McKinney’s team was able to win their league and take third place in state. Now she looks forward to her future career as a member of the volleyball team, who she said have made the University feel like home.

“I love the fast pace of the game and coming together as a whole with my teammates, and the thrill and passion
it takes to just get to point 25,” McKinney said.

Carver said he believes she has the potential to be a dominant offensive player the team can rely on; “In addition to her offensive prowess, she is an equally good defender and has very good ball control skills.”

“When I think of Jessica, the term ‘winner’ comes to mind,” Carver said. “She is a very athletic, quick and explosive middle hitter. She is just the caliber of player we were looking to add to our middle hitter corps.”

Meyer said she is most excited for the friendships she is making; “I am most looking forward to play with my great teammates.”

Elizabeth Williams is another freshman player looking to make an impact on the court. She is a graphic and web design major and a 5’9 setter from Springdale, Arkansas. Coach Carver believes her ability to set tempo and her volleyball IQ will help take the team to new offensive heights this year.

“Elizabeth is very solid and seasoned setter who has experienced a lot of success on the court,” Carver said, mentioning her ability “to deliver the right set, in tempo, to the right attacker and putting our attackers in ideal positions to score.”

Lindsey Davis, a 6’0 middle hitter and accounting major from Plano, Texas, has versatility that Coach Carver believes will be able to impact the team in the long-run.

“She brings a lot of experience as a middle hitter,” Carver said. “But we are training her to be an opposite hitter to take advantage of her height and long block reach. Lindsey is a quick study and has made great strides in learning this new position.”

Megan Beck is the final freshman rounding out the
JBU volleyball team this year. Beck is a 5’9 right side hitter from Frisco, Texas, majoring in Christian Ministries with a focus on Christian Schooling. She brings versatility to the Golden Eagles this year, as she had experience playing almost all positions on the court during her high school career. She is also left-handed, which gives her an instant advantage as a setter and opposite hitter.

“We’re currently utilizing Megan as one of our opposite hitters and serving as a back-up setter,” Carver said. While the five new freshman this year have certainly met or exceeded Coach Carver’s expectations, he has high goals for his team overall.

“We want to consistently take advantage of the learning opportunities we are given each day and attempt to grow and
get one-percent better each and every day,” Carver said. “We want to be a team that ultimately is a reflection of Christ in how we play, and to do it in a way that brings Him honor and glory both in victory and defeat.”

The University volleyball team is getting ready to dive head first into the middle of their season. In the coming week they will take on Bacone, Oklahoma on September 8 and will
travel to Spring eld, Missouri, to compete in the Evangel Tournament on September 9-10.