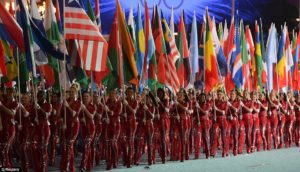 “Most people watch football, but nobody knows about six-man football,” Gage said. “Six-man football is the small town football. Six-man is different; the field is smaller, the rules are different, and it’s much faster paced. It’s all go-go-go and everyone is an eligible receiver and the game is unpredictable. But no one knows about it unless they live in small-town southern U.S.”

For junior Jess Jansma, sports in her home country of Brazil were more than just physical activities: they were bonding activities.

“[Soccer] is a way of connecting and building relationships,” Jansma said. “Growing up, the community I lived in would visit nearby villages every Sunday to have Bible studies with the believers there. Before and after we studied the Bible each Sunday, we played a game of soccer. Not only did the soccer games recruit others in the village to hear the testimony of believers, but it allowed the believers to connect in fellowship. These times were some of my favorite times during the week.”

Jansma said that in Brazil, “one participates in soccer to participate in the culture of the Brasilian people.” She said that soccer is directly tied to patriotism in Brazil.

“I was worried about fitting in at my neighbors’ July 4th barbecue because I didn’t have a U.S. soccer jersey to wear,” Jansma said. “I remember asking my mother (an American) if she knew of any good stores to buy a U.S. soccer jersey. When I told her that I needed one for the U.S. Independence Day, she explained to me that though Brazilians most often wear their Seleção soccer jerseys on Brazil’s Independence Day, Americans do not have the same connection from soccer to patriotism.”

In her neighborhood, Jansma said they played soccer about three times a day.

“I miss playing soccer in the warm Amazon rain,” Jansma said. “There is no better feeling of freedom and connection with God and friends. I also miss how easy pick-up soccer games were started. Americans tend to appreciate schedules, plans, and calls in advance, so pick-up soccer games are much rarer than they are in my community in Brazil.”

“Soccer is a big deal in Central America,” Magana said. “It is very popular in the professional realm, and it is also the most played one. I remember growing up and playing soccer in my neighborhood’s main street since I was like five. We would play with a plastic ball and we would use our own shoes to build the “goal net”. Every Salvadoran that I have met has a story to tell regarding to their memories playing soccer or watching it live or on TV.”

Soccer, however, isn’t the only sport that is received differently in other cultures. Sophomore Daniel Lim grew up watching futsal and badminton in Malaysia.

“The two most popular sports are soccer or football and badminton,” Lim said. “Having a ball and flat surface is enough for people to start a game. Professionally, the national team is horrendous but people still watch them. Now badminton is the national sport. Badminton courts can be found almost everywhere and people are always playing it.”

“Whenever Lee Chong Wei had a match, pretty much the whole country stopped moving,” Lim said. “Although he dominated the rankings, victory in world final matches would always elude him. A popular saying would be if he wins the world title, the next day would be a public holiday. Unfortunately, that never happened, but it was always a family event when he reached the finals or had a match against his rival Lin Dan.”

Lim is the Vice-President of the JBU Martial Arts club, and competed on the national level in judo, a Japanese grappling martial art.

“The major difference [between sports in Malaysia and the U.S.] is the attitude towards sports,” Lim said. “Back in Malaysia, sports came secondary to academics. Outside of a select elite, almost no one ever considers going pro. Sports was recreational and nowhere near as formalized as the sports in school systems here .”

Soccer, football, badminton, and judo are just a few examples of different sports that are cornerstones in multiple countries. Sports are an integral way to create intercultural communication.