“We’re not looking for perfect people,” Jerry Rollene, the director of alumni and parent relations, said. Yet the impressive responses from Rasmussen and his references, as well as his accomplishments and character, proved him deserving of the award.

Photography major, Klara Johannesen, is a cousin of Rasmussen and is interning with him as a photojournalist. Rasmussen and Johannesen are of Faroese decent, which Johannesen says she sees influence of in Rasmussen’s work.

“A Faroese way of doing it is very raw…use of light is very important in the North. You take advantage of all the light you can get,” Johannesen said, going on to talk about the contrast between darkness that envelops the islands in winter months, and the light that takes over in summer.

As a successful freelance photographer, Rasmussen is submerged in a competitive environment and surrounded by extensive creativity. He referred to the “constant cycle of growth and failure and the existential crisis of why you’re even pursuing what you’re pursuing,” all of which he has experienced since graduating.

During her internship, Johannesen is excited to learn from a professional who works outside John Brown University and “to see what [photojournalism] looks like from the inside instead of just reading about it.”

During Rasmussen’s time at the University, “He learned something here [at the University] that helped him survive in the secular world…God sends us to change it and Ben is an example of that,” according to Rollene.

“I have really strong feelings about people who come out of John Brown and go and work within the Christian world…because I think that that’s sort of not the point to stay in that comfortable little ecosystem—but to try and be part of a larger cultural conversation,” Rasmussen said.

Although he described being part of this “larger cultural conversation” as a privileged position, “It’s definitely hard and you’re put in weird situations…choosing to be in difficult situations and feeling peoples pain,” said Rasmussen.

On an assignment to the Philippines after hurricane Haiyan, Rasmussen had to “consciously avoid seeing gruesome dead bodies” in order to complete the work that was required of him. “I kind of try and be more mindful of how much I can actually take,” Rasmussen said.

Rasmussen spent a portion of his childhood in the Philippines, where his parents were missionaries. It was there that the University recruited him in high school.

Despite Rasmussen’s success in the field of photography, he came to the University before photography was offered as a major. In fact, he came undecided about what exactly he wanted to study. It was not until he was influenced by Gary Warner, journalism professor at the time, that Rasmussen was persuaded to pursue journalism for his bachelor’s degree.

During his studies, Rasmussen took a class with current professor of visual arts Neal Holland. It was in that class that he discovered photography and decided, “This is way better than writing,” Rasmussen said.

“You just never know how the experiences you have here will change your life,” Rollene said.

Rasmussen greatly values the support and encouragement that he received while at the University. “Sometimes it feels like it would be nice to do those years over. Everyone giving you what you need is sort of hard to take advantage of when you’re 20,” Rasmussen said.

He compared larger colleges, with well-established journalism and photography departments, to that of the University. Rasmussen explained how students in larger universities come out molded a certain way and are set up to be successful, but it makes finding their unique voice more difficult.

“What JBU has going for them is that you’re given the tools but you’re not shoved in this box, so you have a lot more freedom,” Rasmussen said. “It makes for a more difficult process, but you have more room to be unique than those who were suppressed.”

“I think one of the things that was hard at JBU is that professors can only do so much. A lot of it has to do with the larger student culture. I think what really helped me in the long run was to find that maturity of people that were more critical,” Rasmussen said. 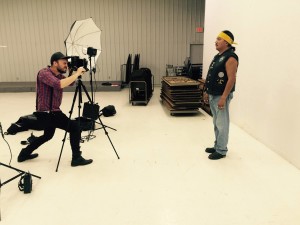