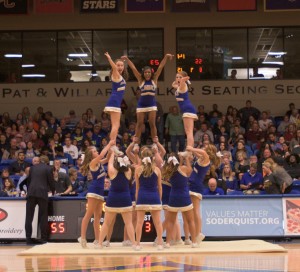 Cheerleaders conquer blood, sweat and tears as well as jeopardize their safety to master their routines at practice. The John Brown University community has the opportunity throughout the rest of the semester to see them perform.

“The cheer team loves to see everyone excited at the games,” co-captain, Audrey Macey, said. “We love it when there’s a big crowd and they participate with us.”

The members of the cheer squad said stunting is particularly challenging. Senior Lindsay Dodson, base on the Cheer team, attested to stunting being “the most intense part of cheerleading.” 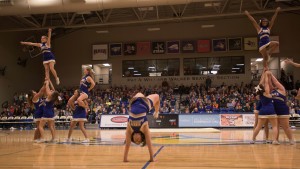 In stunting, the flyer is thrown into the air and caught by the bases and back spot. The base consists of two people who lift the flyer, and the back spot holds the ankles and controls the stunt.

Sophomore, Conner Bedor, flyer on the team, enjoys stunting. “Stunting is probably my favorite thing I do as part of the JBU cheer team, but it’s incredibly hard to do,” she said.

As many stunt and dismount varieties as there are, they all rely on the principle of trust. Dodson said it is similar to “doing an epic trust fall.”

“It’s like four girls becoming one person,” she said. “The minute you set to load into a stunt, there’s an unspoken agreement. It’s like an energy between everyone, and we all know that we’re in this together.”

The unison in stunting is extremely particular. Leaning a single inch too far to one side, throwing too hard or not catching high enough are potential factors for a fall or injury to the flyer or to the back spot and bases catching below.

Choreography is another component that Dodson explained demands specific body positions as detailed as thumb placement. All cheers and routines rely heavily on impeccable harmony, so much so that Dodson described everyone as being so in sync that they are even breathing together.

This team of female athletes holds two hourlong practices twice a week. This does not include tumbling classes and their individual training. They work hard to perfect their stunts, their tumbling and their dances. Bedor explained their efforts are due to their passion for the sport as well as their desire to make routines that appeal to the audience.

Participation in the stands as well as the lack of participation translate to the student athletes and trend within the student community as a whole. Bedor explained the frustration of cheering when few students are in the crowd. She compared it to the fun of cheering for their fellow athletes with a unified spirit of their peers.

“If JBU athletics was more united, then it would be easier for the campus to engage and be more excited about sporting events,” said Bedor. “We are all student athletes who are playing our sport and are trying to represent our school in a positive way.”