Many students gathered last Wednesday for a question and answer session where John Brown University president, Chip Pollard, and chaplain, Rod Reed, discussed the Supreme Court’s ruling in favor of gay marriage and how it relates to the church. Residence Life facilitated the conversations on how the Supreme Court decision affects students and the University after demand from the student body. 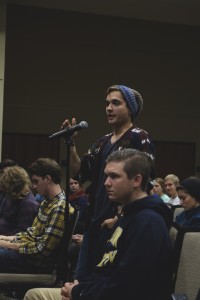 “It was a relevant topic and I’m glad we’re able to talk about it,” Andrea Lillig, freshman political science major, said.

Lillig said it was reassuring to know that the University has a plan for various situations that might arise.

Pollard and Reed explained the University’s position and policies, as well as actions the University is taking to care for and support gay students.

“In the past three years, Dr. Pollard had the board of trustees look again at our statements of faith saying, ‘Is this still what we believe?’” Reed said. “They reaffirmed and reviewed our beliefs and said ‘Yes, this is still our position.’”

The University, as a private Christian institution, holds the traditional biblical position that sexual expression is between a man and a woman and reserved within the context of marriage.

The University’s policies for undergraduate, graduate students and faculty applies to both LGBT and straight students—all are encouraged to live lives of chastity in singleness.

The University admits students regardless of their sexual orientation and makes every effort to provide the same care and support to gay students as straight students.

Reed said that besides the counseling center, faculty and staff are also available to talk.

Reed hosts a regular confidential meeting in his office as a place where gay students can get together and discuss what it means to be a Christian and to be gay. Students not only have the opportunity to be heard by each other, but also by Reed, a representative of the University administration.

“It is a place of openness,” Reed said.

The University further encourages community, meaning it has no tolerance for harassment, violence, or use of derogatory terms for either heterosexual or homosexual students.

The Supreme Court decision on gay marriage can have long-term effects on institutions and students through the decrease of federal funding or the institutional denial of accreditation. The decision can also affect the perceptions of University graduates for grad schools or even jobs.

“JBU students are trying to figure how to live in a way that’s keeping with who Christ is,” Pollard said. “I thought the questions were very thoughtful both beforehand and during the session,” Pollard said. “I appreciated the tone of trying to understand and willing to see both the truth and love and the complexity of that.”

“There wasn’t anything groundbreaking, but it served as a reminder for all of us,” Zeke Willcox, sophomore communication major, said. “I really appreciated what they said and how they said it.”