I have always been unclear on my position on the death penalty. Sometimes I support it, other times I disagree with it. However, last Friday my opinion of the death penalty completely changed.

I attended a conference with staff members of The Threefold Advocate in Austin, Texas. We attended workshops and went to keynotes put on by different speakers. 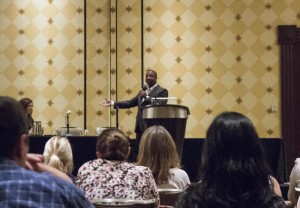 The keynote on Friday was by a man named Anthony Graves. When he was 26, he was wrongfully convicted of the murder of six people (including four children).

He then spent 18 years in prison and had two execution dates scheduled. Yet he was released because there was no evidence against him.

This situation caused me to rethink my stance on the death penalty. In Graves’ case, there was a lot of misconduct. In his speech he mentioned how the prosecutor falsified evidence, lied in court and tainted the jury by traveling to the site of his trial before jury selection to talk about how this man was guilty.

This is not the only time that misconduct has occurred during a trial.

There is also the possibility that someone can be put away not by misconduct, but simply by mistakes, whether by the prosecution or the jury. The world is imperfect and people can make mistakes. It is reasonable to assume that we have accidentally put some people on death row who do not deserve to be there.

150 people have been exonerated since 1970 because they have been found innocent. Between 2000 and 2011, an average of five, people were exonerated each year, according to Death Penalty Info.

There is no way to make sure that every person who is on death row or in prison is really guilty. There is no way to know if a person is guilty without their confession. Therefore we are really basing our decision off of the evidence presented.

Because of this I believe that America needs to get rid of the death penalty because there is no way to be positive that the person is actually guilty.

There are also other strong reasons to oppose the death penalty. It does not seem to be an effective deterrent.

The cost of pursuing a death penalty case is also extraordinarily more than not pursuing one. In Washington the difference is almost $1 million between a case where the death penalty is not sought and one where it is, according to Death Penalty Info.

Therefore there are several practical reasons why the death penalty should not be sought and alternatives should be considered. It costs more money and does not lower violent crime.

White is a junior majoring in communication. She can be reached at WhiteSJ@jbu.edu.