Five days before the end of last semester, Brooke Barker scored the 1,000th point of her college career without even realizing it.

Barker, who plays forward for the Golden Eagles, became the 17th player in program history to accomplish this feat. She followed Lauren Rogers, who reached the same milestone last season. The milestone was reached in the Golden Eagles’ game against Crowley’s Ridge College in Bill George Arena on Dec. 12.

“I had an idea that it was close, but I didn’t know when it would happen,” Barker said. “If I remember correctly, it was on a fast break. Someone threw me the ball down the court and I caught it and scored.”

Immediately following the fast break, Golden Eagles coach Jeff Soderquist called a timeout. Barker realized what she had done only after the announcers reported it over the P.A. system.

“None of us knew it was her 1,000th point,” teammate Lauren Pelegreen, who plays guard, said. “But coach called a timeout to let us celebrate for her.”

The Golden Eagles went on to win the game by an impressive score of 94-55. Barker expressed her happiness to have scored her 1,000th point in front of her own school.

“That was our last game before we went to Florida,” she said. “It was cool to do it in front of people who have seen me play. My dad was at that game, too. Even though he lives far away, he was there, so he got to see it.”

Barker did not receive official recognition for her achievement until a month later, when the Golden Eagles squared off against Texas Wesleyan University in Bill George Arena—their first home game since beating Crowley’s Ridge College in December. Before the game, Barker received a commemorative golden basketball at center court.

Coach Soderquist pointed out that such an award is a testament to Barker’s consistency over four years.

“It’s not a one-year honor,” Soderquist said. “To score 1,000 points in a career shows a lot of consistency. That’s the main thing.”

In spite of her accomplishment, Barker never put her own gain in front of the team. She expressed that her personal goal of every game is to win, regardless of her own performance.

“I’ll do whatever I can to help the team win,” Barker said. “If I score 20 points and we lose, it’s still a loss. If people are double-teaming me, I’ll kick it out to an open person so that they can score.”

While she scored all of her 1,000 points, Barker mentioned that her accomplishment was really a team effort.

“I couldn’t have scored without my teammates driving and dishing, getting rebounds and working hard in practice,” she said.

Barker’s teammates and coach are proud of her and believe that she deserved the honor.

“It’s a good demonstration of who she is as a person,” Pelegreen said. “She’s always going all out, whether it’s in school or in basketball, to be the best she can be. I’m glad she earned it. She deserves it.” 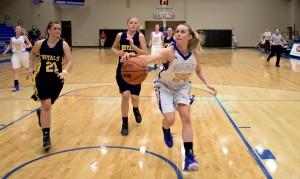