Passion and perseverance are words that describe senior graphic design and illustration major Kenny Crane. However, art is not his only passion—he also finds joy in running for John Brown University’s cross country team.

Crane has been part of the cross country team since his freshman year of college. Even though he did not plan to be part of the team, God had a different plan for him. Crane’s passion for running started when he was a child.

“I started in seventh grade with track and field and I did it all through high school,” he said. “I  was not planning on running [in college], but at the last minute I changed my mind because of a scholarship.”

After spending almost four years on the team, Crane described cross country—both men’s and women’s—as a family. He said that the feeling of being part of a family comes from spending a considerable amount of time together.

“Women and men practice at the same time, we go to the same meetings, we ride the same bus and we go to dinner together after work. We do everything together,” he said. “We look after each other and go through life and school together.”

Crane also said that being part of the team has helped him grow spiritually. 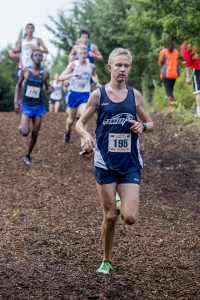 He explained that the coach does activities that encourage students to reinforce their relationship with God.

“We pray before each practice,” he said. “In the fall, the coach has [us] over his house every Thursday for dinner and sometimes it would just be fellowship and just hanging out. Other nights he would have a message or something to think about over the Bible.”

Crane’s commitment to the team has led his teammates to admire him. Thomas Bearden, teammate and fellow senior, said that he considers Crane to be a strong leader. He described Crane as one of the most mature and reasonable people on the team and that the decisions he makes prove it.

Another characteristic that his teammates admire is Crane’s commitment in anything he does.

Justin Riffle, sophomore teammate, said that Crane has a unique perseverance when he is running. He expressed that despite the difficulties, Crane always pushes himself to continue to any goal.

“He pushes himself to continue when the rest of us feel a little bit tired,” he said. Crane will  graduate this May, but is planning on continuing to run after he finishes his college education.

“Running has become a lifestyle,” he said. “It is not just a hobby to me. I want to keep it going.”

Despite the uncertain future after college, he is excited to see what God has prepared for him.