I would like to present an honest conversation about a fear that we as Christians have that is unnecessary, uncalled for and ultimately wrong in the light of the saving grace from God through Jesus Christ.

Recently, I read a book titled “Crash the Chatterbox” and the perspectives discussed in the book have changed my life. The book is about transforming the voices in our heads or self-talk from satanic lies that make us fear and doubt to God’s truth—truth that empower us and affirm us as his created beings.

When we have insecurities or the negative self-talk is ringing through loud and clear, author Steven Furtick says that our approach to fear cannot be passive and that “you must either kick fear
out of your heart or it will keep you out of the places God has prepared for you.”

So the fear of failure, the fear of what others think of you and the fear of disappointing others must be identified, captured and thrown out in order to be replaced with God’s truths found in Scripture.

Relationships with others, such as parents, friends and significant others are full of fear as well. Parents at this stage in life, authority and decision-making can be a point of heated debate.

For example, a couple years ago, my father was so set against me traveling and spending time in a mission field that I dearly loved and felt called to. His reluctance to let me travel was grounded in the fear that had been cultivated by the world news; his fear was that I would be kidnapped, hurt or worse if I spent time away from the safety of home.

Eventually, in obedience to God’s will, I decided to go against my father’s wishes. But with his blessing, and thanks be to God, I returned safely to his arms and felt like I had done the right thing, and finally my father knew it, too. He had to trust God with his daughter’s safety and I had to trust God that he would help my father understand when I could not.

Becoming vulnerable with close friends or those you may want to date is difficult, especially if you have been hurt in this situation before. So many circumstances factor into each person’s willingness to share information about themselves, but in order to mature and grow in relationships, we must get over the fear of rejection, the fear of personal failure, and the reminder of failed past relationships. Ultimately, this is to exhibit Christ’s love through our relationships with our brothers and sisters in Christ.

Fear in culture is definitely something Christian Americans don’t talk about nearly enough.

An online article titled “Fear” by Marilynne Robinson argues that whether we think so or not, America continues to be viewed as a predominately Christian nation by the world. Robinson’s thesis states two claims: “First, contemporary America is full of fear. And second, fear is not a Christian habit of mind.”

The two should negate each other, but they don’t. Fear and what is supposed to be the love of God coexist in America today in a big confused mess.

President Barack Obama addressed this confused mess at a the National Prayer Breakfast in February and stated, “He [Jesus] gives us the courage to reach out to others across that divide rather than push people away. He gives us the courage to go against the conventional wisdom and stand up for what’s right even when it’s not popular–to stand up not just to our enemies, but sometimes stand up to our friends.”

The leader of our nation, whatever you may think of him, is encouraging us to do just what we are already called to do as Christians, which is to combat fear with the love of God. 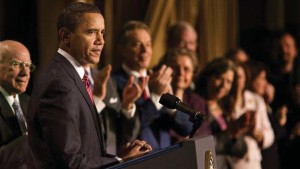 Crouse is a senior majoring in digital cinema. She can be reached at CrouseR@jbu.edu.